Posted by SHARE on Freitag, 14 Juni 2019 in Product Knowledge 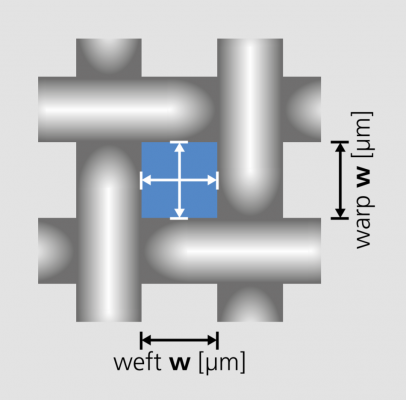 A micron is a unit of measure in the metric system equal to 1 millionth of a meter in length (about 39 millionths of an inch). The average cross-section of a human hair is 50 microns. The human bared-eyes cannot see anything smaller than 40 microns in size. Let us see what micron rating is in filtration industry when we talk about filter media, such as filter mesh, filter cloth, filter felt.

For example, a particle of "10um" to be removed from fluid, there is no single way to determine how much and how big a filter media can hold the contaminants, then filter efficiency should be evaluated to determine the filter media performance, there are several variations of micron rating, but nominal and absolute filtration ratings are the two elements to be used in terms of filtration effiency.

Nominal Micron Rating: The ability of a filter to hold particles at certain efffiency between 60% and 98%; Taking 5um particle in size as an example, if filtration rating is 50%, which means that 50% of the total "5um" particles to be captured by filter media at upstream, while the rest 50% will be at filtrate (at downstream)

Absolute Micron Rating: shows that a filter can capture about 98.8% of given particles in size, the rating is determined through a single pass or multi-pass of fluid containing particles designed to be removed.